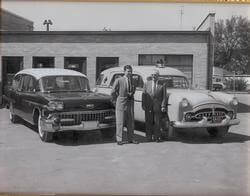 The Alspach-Gearhart Funeral Home and Crematory has been serving the families of Van Wert County ever since Rev. E.F. Gamble began operating the original funeral business in Middle Point in 1903. After only two years, a larger facility was needed and Rev. Gamble decided to relocate his young and flourishing business to Van Wert. In 1905, a site was selected on the first block of S. Washington Street where Peking Chinese Restaurant in now located.

In 1926, Rev. Gamble was joined in his business by his son-in-law, Gordon H. Alspach, who had married Gamble’s daughter, Grace. In May of 1938, the funeral home again saw the need for a larger facility and was moved to 316 S. Washington Street.

In 1955, Gordon’s and Grace’s son, David, joined the firm. His life was tragically cut short when he was electrocuted in 1956 while responding to an ambulance run. After David’s death, the Alspach’s youngest son, John, answered the call and began his career in funeral service at the funeral home 1957.

In 1959, with the changing landscape of funeral service, and the shift from holding visitations and funerals in the family’s home to the funeral chapel, Gordon and John saw an opportunity to better serve the community and constructed a brand new, state-of-the-art facility designed exclusively for funerals at its present location, 722 S. Washington Street.

As was common with funeral homes during those times, Alspach Funeral Home provided ambulance service before the advent of the modern day EMT. Always at the forefront of the profession, the Alspach Funeral Home went one step further and began providing Air Ambulance Service in 1961. With the purchase of their new oxygen-equipped Pipe Comanche 250 and a full-time pilot, Alspach Funeral Home was now able to service an even “larger area with greater speed and efficiency.”

Michael Gearhart joined the firm in 1975, followed by Tim Jurczyk in 1988. In 1989, Mike Gearhart became a partner in the business and the name was changed to Alspach-Gearhart Funeral Home.

With the rise in cremation, the funeral home once again saw an opportunity to better serve the community with the addition of the Van Wert Crematory in 1996. By investing in a brand new, state-of-the-art crematory on its current property, Alspach-Gearhart Funeral Home became the only full service on-site crematory in Van Wert County, which still holds true today.

To better serve the western Van Wert county community, a brand new facility was constructed in 1998 in Convoy which became Gearhart-Sauer Funeral Home.

Mike’s son, Andrew Gearhart, joined the staff of Alspach-Gearhart Funeral Home and Crematory in 2001 ultimately becoming a partner in the business.

Sean Sauer joined the firm as a funeral director and embalmer in 2015 and became a partner in 2016.

Andrew Gearhart’s wife, Nichole Gearhart joined the funeral home in May of 2021 taking over responsibilities as a funeral director at Ketcham-Ripley Funeral Home.